Amateur radio and apartment living do not mix. Or do they? It's true that your antenna choices are much more limited than if you had a separate house on land. But in many cases you can still get on air.

Having your own open balcony helps. I discussed balcony antennas last month.  Another possibility, if you don't want anything permanent and you're on a high floor, is to drop a temporary wire out and feed it at the top as an end-fed. A fishing pole that keeps it away from the building is desirable.  You may need a weight but be careful that it doesn't blow into someone else's window or attracts undue attention.

Indoor antennas are always compromises, with higher noise pick-up on receive and weaker signals on transmit. But you could try a magnetic loop. A diameter between about 90 and 150 cm will allow operation on many popular HF bands.  They may look out of place but you may be able to disguise it by wrapping its copper or aluminium element with white tape.

Another option, particularly if your place is open-plan, is to string a dipole or similar across. Let's say that you have two rooms about 4 metres wide. That gives 8 metres of antenna space. In other words enough room for a full sized dipole for 15 metres.  Now 21 MHz isn't that active at this phase of the solar cycle so you would probably want other bands. You could add about a metre either side (dropping down) to provide a full sized dipole for 14 MHz.  Or consider adding a trap on each side for a dual band 14/21 MHz antenna.  Alternatively, feeding a 21 MHz dipole with open wire feed line would allow efficient operation on 14, 21, 24 and 28 MHz. That is providing your building's walls don't shield too much of the signal.

There are other possibilities as well. Some are mentioned in my 'Antennas for confined spaces' posts a few days ago. I also suggest the links below:

Have you tried operating HF from an apartment? What are your experiences? Please leave your comments below.


PS: Want to support The Daily Antenna?
Please start your Amazon shopping here.
You won't be charged extra and I'll get a small cut from any purchases you make (affiliate link). You can buy lots of stuff there, including electronic parts and my books.
at April 16, 2019

The March 2020 issue of QST has an article on batteries for QRP rigs that some of you might find interesting.  Even better is it's... 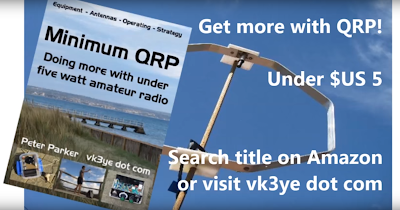